On the Road Again  – This Time to Escuintla

On the Road Again  – This Time to Escuintla

Our second day in Guatemala began with another early morning drive with our friends from Mundo Posible. This time, we headed south from Antigua towards the coast. We would be visiting three schools set up for children of workers from the local banana plantations. And, along the way, we would learn some interesting political and economic history which continues to impact Guatemala today.

Mundo Posible has been working with the Association of Independent Banana Growers (APIB) to bring better quality learning materials to children in this area. They installed a RACHEL-Pi with tablets in 60 schools, along with a router, rather than the more powerful, but more expensive, RACHEL-Plus. This combination is a less costly way to set up digital learning for a large-scale project, while still ensuring sufficient WiFi coverage. More on this later.

Lots to learn about volcanos and bananas

As we left Antigua, the sight of Volcán de Fuego (Fuego Volcano) was mesmerizing. Still active, it continues to send out plumes of smoke and ash from its high summit. It last erupted just over a year ago, causing catastrophic damage and great loss of life in the area. It buried villages below with streams of lava and ash and we could see the remnants of its path, like scars scattered across the terrain. 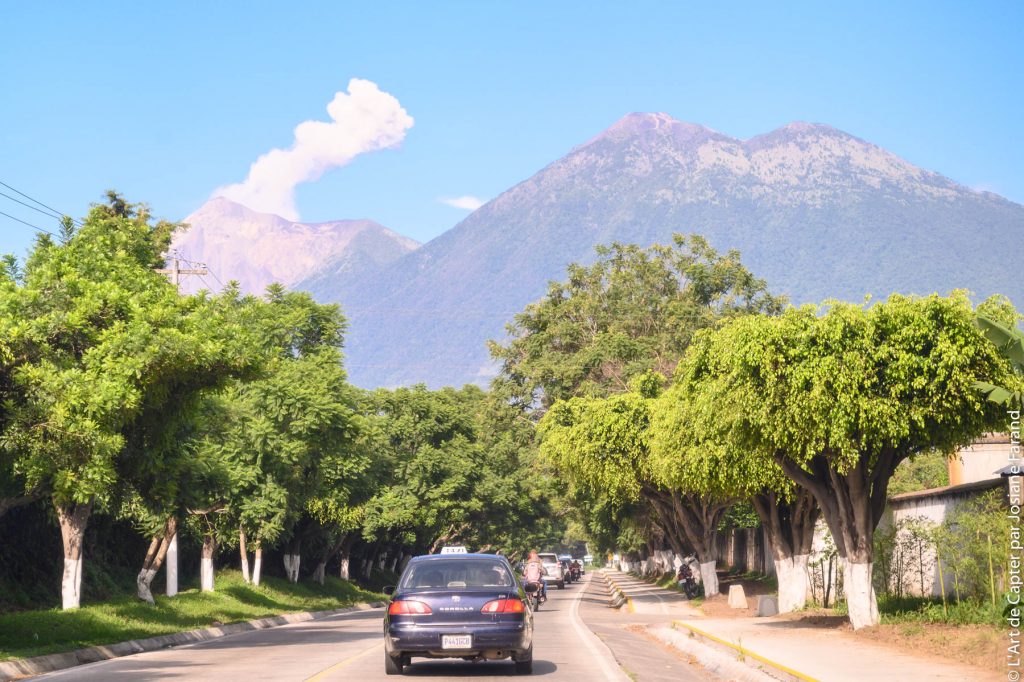 On our way south, we picked up Ronald Pérez who manages APIB’s corporate social responsibility (CSR) programs. An agronomist by training, Ronald explained to us the impact of bananas, an important crop in both Guatemala’s modern-day economy and its political history.

His story begins with the United Fruit Company. Established in the U.S. in the late 1800s, the company became a quasi-monopoly in the fruit trade. It sold fruit to countries in Europe and the Caribbean, sourcing most of its produce in Latin America. Overbearing and hugely influential, the company intervened directly in political decisions in the countries in which it operated – to protect its own interests.

The outsize political influence of a foreign company on national policy, combined with dependence on a single natural resource ­prompted prominent American writer, O. Henry, in 1904, to coin the familiar term “banana republic”.

Corporate changes over the years meant that the United Fruit Company name was lost, but many of you will recognize its modern equivalents in large transnational companies that operate in the region: Chiquita, Dole and Del Monte. These companies continue to dominate the banana trade. They have their own plantations but also buy produce from local, independent growers.

Producing bananas is hot work, and workers are out in the sun and drenching humidity for exhausting 8-hour shifts. But because it is carried out year-round, this work provides a bit more economic stability to the farmers than other crops, like sugar cane, that have shorter growing seasons.

The community of Escuintla may be just one hour south of Antigua, but we felt the impact of the huge temperature difference. Oppressive heat and humidity caused ripples of sweat to start forming as we stood in the classrooms where we met the students and teachers. 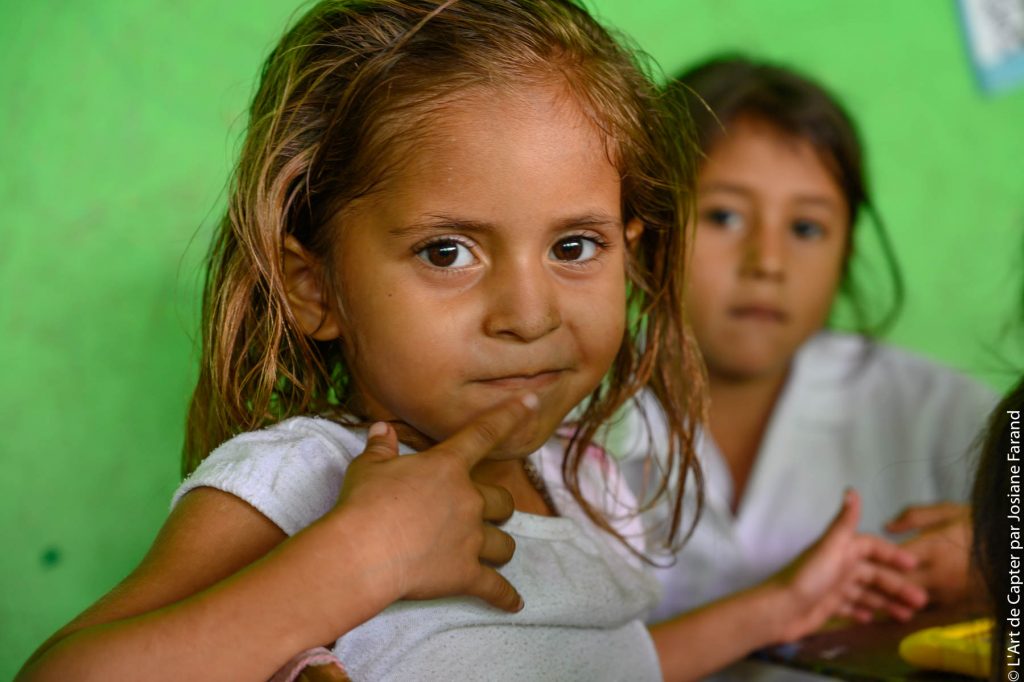 The first primary school we visited has over 300 students in 17 classes from kindergarten to grade 6. We met the passionate principal who advocated strongly for her students – she was welcoming, kind and warm, with a strong vision and even stronger determination.

Students at all grade levels have access to e-learning in class for 25 minutes a week at this school. The principal and the students want more but, in order to provide access to all, connection time is limited.

Teachers here, as well as at the two other schools we visited, use content uploaded onto the RACHEL so that children can learn new concepts like colours (kindergarten) or the solar system (grade 2), or reading comprehension with integrated questions (older grades). 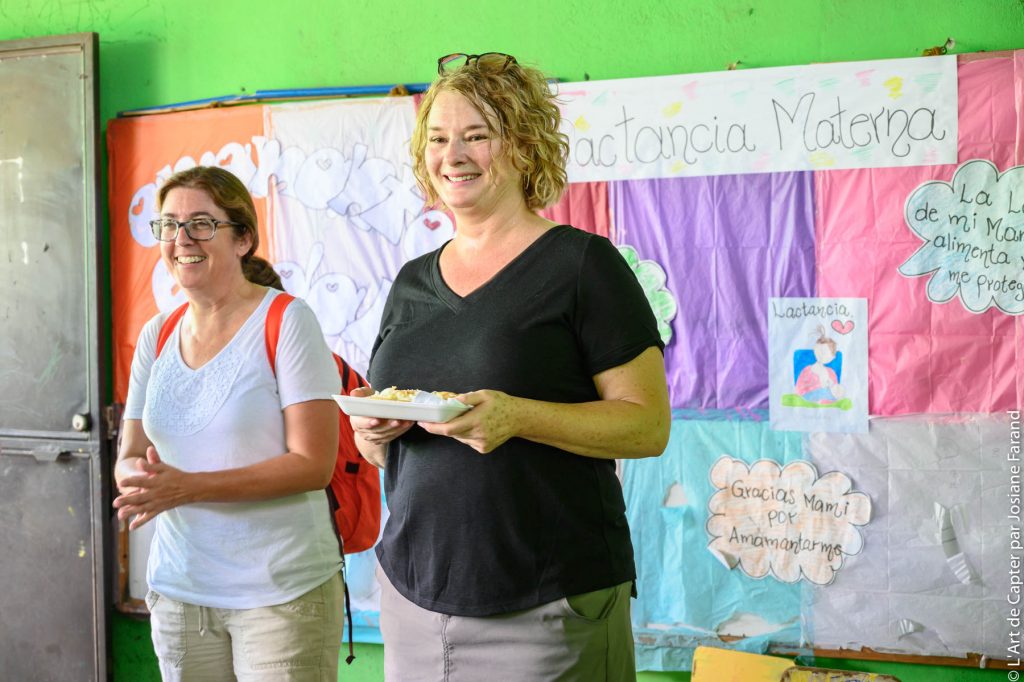 While we were in the classroom, the RACHEL signal momentarily cut out, dropping the connection between the content and the children’s devices. I was intrigued when I saw the teacher quickly switch tablets between kids in the kindergarten class. I couldn’t figure out what she was doing. Then Romeo, from Mundo Posible, explained that she had asked a particularly tech savvy student to reconfigure the program they were working on for other kids. He had become the class IT guy!

I know that I am beginning to sound repetitive, but I have to say again that the students love working with the digital content. We heard from teachers and principals alike how the students are enthusiastic and energized in class and engaged in what they are learning. We saw peer learning in progress as kids often worked in small groups sharing information and advancing their understanding together.

Another great day of learning for us too!

Thank you for all of your support.